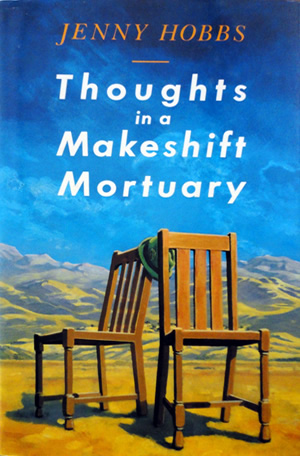 Thoughts in a Makeshift Mortuary (Michael Joseph London, 1989; Grafton, 1990, Umuzi 2014) deals with the tragic effects of apartheid violence and hatred on young South Africans, and is also a double love story spanning thirty years. Thoughts was a finalist for the 1989 CNA Literary Award, and was published by Econ Verlag in Germany under the title Tief im Süden.

“The date is December 1985; the place a village in the mountain kingdom of Lesotho, the independent black country surrounded by white South Africa.  Hooded gunmen have come in the night and shot dead a young couple: Rose, a South African teacher, and her coloured husband Jake, a poet turned ANC activist with whom she had been living in exile.  Her mother grieves over the torn bodies while her father rages round the village in a fury of loss. In a series of flashbacks, Rose’s life and her parents’ stormy marriage unfold against the background of the turmoil and agony of recent events in South Africa, dominated by the urgent need to identify with those set apart for their colour.  But, as the local people prepare for the funeral, a ray of hope shines through the darkness.  The white girl and her husband did not die in vain.  There was a survivor of the shooting…  A pulsating first novel from South Africa, Thoughts in a Makeshift Mortuary is the tragic account of a forbidden love between two people of different races and a lament for the young lives being laid waste in an unhappy country.  Above all, it is a praise song to the South Africans of all races who are trying to build bridges rather than blow them up.”