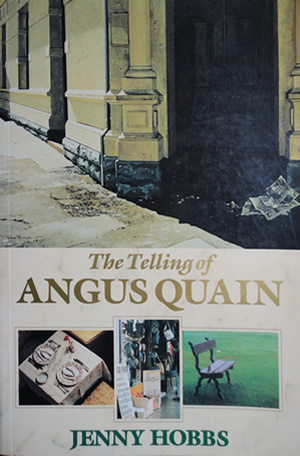 The Telling of Angus Quain (Jonathan Ball, Johannesburg, 1997) is the account of an unusual friendship between a Johannesburg business tycoon and a woman historian, set largely in the men’s club where he lives.  When he is diagnosed as having terminal cancer, he begins to tell her about his less-than-savoury past and her life takes a very different turn. Quain was shortlisted for the 1998 M-Net Book Prize and was also chosen for submission for the Irish Impac Award. It was published by Econ Verlag in Germany under the title Der Stern von Johannesburg.

“The Telling of Angus Quain is a sharply observed novel of contemporary Johannesburg, featuring Angus Quain’s rise from railwayman’s son to executive glory and his unusual friendship with Faith Dobermann, a lonely writer/historian who begins to realise that he is not who he seems…  In the corporate world where power equals money, ‘King’ Quain reigns supreme until he is sabotaged by cancer and his carefully constructed secret lives begin to unravel.  Faith’s curiosity about him grows into a quest for the truth that takes her from a Jeppe striptease joint along the devious byways of financial corruption to a startling confrontation between the dying man and his rivals in fraud, witnessed by the people he has spent a paradoxical lifetime helping. This is the compelling story of a brilliant but flawed man and his last, redeeming relationship with an independent younger woman: a story of our time, cast with people whose voices are all too familiar and set against the minefield of modern city living.”