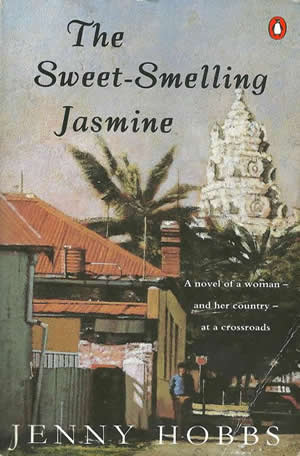 The Sweet-Smelling Jasmine (Michael Joseph, London, 1993; Penguin, London, 1994) moves between the early 50’s and the present.  It centres on an unhappy wife whose new lover encourages her to delve back into the dramatic events of a year in their shared past in a racially mixed town on Natal’s South Coast, when community unrest culminated in rioting and the destruction of a Hindu temple.  Jasmine was submitted by South African librarians for the Irish Impac Award, and published by Econ Verlag in Germany under the title Zeit des Jasmin.

“The Sweet-Smelling Jasmine is a rich and multi-layered novel, set in present-day and 1950s South Africa.  It opens with Isabel in the arms of her unnamed lover, a man from the brief exciting year in her youth when she discovered a whole new world in the Natal sugar-mill town of Two Rivers.  A world which became a powder keg of racial tension and religious fervour, and finally blew up when a Hindu temple stood in the way of progress.  What happened to the gutsy, inquisitive young Isabel, who is now an unconfident woman straining against the shackles of a moribund marriage and much-loved but demanding grown-up children?  Who were Finn and Stella, Mr Reddy and Opal, Kesaval and Asha, and the frenzied Sister Kathleen?  And which of the four boys from Two Rivers has she met again and fallen in love with? At her lover’s urging, Isabel resolves to untangle the threads of her life – and perhaps gain enough self-respect to free herself from her carping husband – by writing about the events she experienced as a teenager and about the people she shared them with.  As she remembers the series of incidents that led up to the fatal explosion of violence on a Good Friday evening, Isabel comes to terms with a part of herself that for years has been repressed, and in doing so, she finds the key that will change her life.”