The vicissitudes of living in South Africa are fertile ground for novelists to excavate and examine particular aspects of our society. Replete with the hyperbole, exaggeration and embellishment, satire is one such form, a Janus-faced animal animated by the impulse to contort and distort, ever ready also to illuminate truth and understanding.

Contingently, The Miracle of Crocodile Flats by local author Jenny Hobbs hits the shelves marketed as “an affectionate satire”. With the sighting of a brown-skinned Virgin Mary in a small South African village as its starting point, Hobbs offers readers some cascading, character-driven impressions. It is a vision of ourselves in a post-apartheid moment, both lovely and laced with bite, casting its focus on two main areas: religion and race. The fault lines between these two focal points in the novel emerge slowly and organically after Hobbs observes the pathos, disillusionment and entrenched suffering of a small village. The people of Crocodile Flats are in dire need of something to lift their spirits – and a vision of pious purity and pure piety by a young girl is just the ticket.

A miracle is generally accepted, particularly in the religious sense of the word, to denote a wonder or marvel, a vision or sensation of that deemed impossible. The “miracle” here is the sighting of Ma-Jesu – the Virgin Mary, African, benevolent, smiling and smelling of peach blossom and vanilla cupcakes – by the fourteen-year-old Sweetness Moloi. Soon after the sighting, a multitude of attention-seeking, money-grubbing and self-serving characters from all over the world envelopes the poverty-stricken rural community of Crocodile Flats. Chief among these shady specimens are the entrepreneurial prophet Hallelujah of the Correct Baptised God Come Down in Africa Church. And is he not amusing!

It is one thing to peddle ready-made, hand-me-down stereotypes of small town life and to pass it off as “satire”, something else entirely to dig deeper, to draw from the well of the familiar to present a portrait of characters in motion, responding to their surroundings in ways that are true and exact. As such, Hobbs is adept at drawing out the more ridiculous, facile and hypocritical behaviour of the various “pilgrims”: she lands more than a few telling blows when examining the underbelly of formalised religion. Here the satire is superficially playful, but emphatic, forceful.

Additionally, Hobbs includes just about every type and manner of particularly South African identities here. It is through her expertly rendered, imminently poignant characterisation of the local inhabitants that the “affectionate satire” comes most strongly to the fore. Come the conclusion, the end result of the vision Sweetness has is largely predictable: readers will be well prepared for the resolutely exultant end section of the novel, in which every little loose end is tied up and gift-wrapped, and everyone gets their moment in the sun… While this well-written portrait is an unashamedly feel-good read, making satire “affectionate” is no mean feat, and The Miracle of Crocodile Flats delivers on its promise. 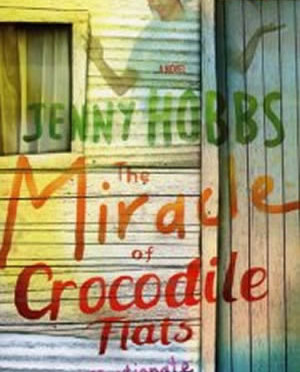