It used to be that writers toiled in seclusion, and if published were only subject to the angst of sitting for a publicity photo that made them look intellectual, rugged, sporty, spiritual, adventurous, gothic or humorous, depending on the genre.

To be noticed today, writers have to be out there giving interviews and talking at book launches and literary festivals, broadcasting their views and updating themselves in blogs, on Facebook and Twitter. Many love the interaction with readers and other authors, while a hardy few whose books sell anyway refuse to play the promotion game.

How and where do you write?

On a laptop on a large table in a quiet study with a view of mountains; close by are a printer, an internet connection and my research notebooks and reference books, including several dictionaries and my all-time favourite, Brewer’s Dictionary of Phrase & Fable. For years I wrote longhand, believing that thoughts run down your arm from your brain and flow out onto paper, then typed out and corrected the manuscripts, sometimes over and over. In the early Nineties my daughters persuaded me to try a computer and it was a revelation: the thoughts could flow as fluently onto keys!

When and how much do you write?

Every day unless I have visitors or meetings or chores, sitting down at about ten and sometimes working through till the evening, with a break to read over lunch. It’s not a matter of discipline, it’s what I enjoy doing. Some days it goes well and on other days it goes slowly, needing constant revision. A thousand words is good going; on rare days a powerful memory or idea will tumble out as fast as I can type.

Do you plot your novels beforehand?

No. I’m a non-plotter. Ideas may brew for a long time before one gels, and like most writers, I have a trove of beginnings that grew into several chapters before they petered out. There’ll be a day when I decide to relook at one to see if it still has potential, or am seized by an idea that needs to be written. I start with a situation and two or three characters, and the story will grow from there, with more characters walking in as it goes along. It’s an organic process that I compare with a grain of sand irritating an oyster to coat it with layers and layers of nacre that grow into a pearl.

My settings are South African, any time from the Thirties until the present. They have varied from KwaZulu Natal where I grew up (Thoughts in a Makeshift Mortuary, The Sweet-Smelling Jasmine, Kitchen Boy, Video Dreams) to Johannesburg where I Iived with my family for the longest (The Telling of Angus Quain), to somewhere on the platteland (The Miracle of Crocodile Flats) to Cape Town (Napoleon Bones). Kitchen Boy was also partially set in North Africa and World War II prison camps.

I don’t rush through a first draft to the end; I write slowly, rereading, editing and adding as it becomes more substantial, and find that the books naturally take shape as the characters and their actions coalesce, sometimes coming to an unpredictable end. A book can take a year or two; a short story can flash out in a day or two, though I write few of them now.

Where do you get your ideas?

Mainly from watching and speculating about people. What’s great about being a writer is that you’re always observing and listening and wondering why people do the things they do.

Why do you write such different books?

Because I want to explore different ideas and situations. I’m not writing for a specific audience or to impress critics, just trying to tell good satisfying stories. Writing the same kind of book or a series would not be a challenge.

How do you deal with negative reviews?

Philosophically. I’m not considered ‘literary’ nor am I one of the bestselling crime, sex or adventure novelists whom most people are reading now. (NB Writing about sex is a challenge; hats off to those who manage to recount steamy encounters with aplomb.) The best comments come from readers who say, ‘You were writing about me’ or ‘I know people exactly like that,’ because then you know you’ve done it well.

Who do you take advice from?

I neither talk about an idea I’m considering, nor ask advice about the writing of a book in progress, though I do extensive research and consult books and experts to get my facts right. Once the manuscript has been accepted, interacting with a good editor is essential because they see the overall picture and will advise you where it could be improved, and pick up errors and inconsistencies. 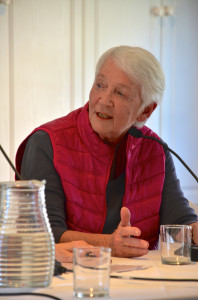 What will the next one be about?

In my opinion a leavening of humour is essential in a novel, even the grimmest. Two of my recent novels have started as satires in which I wanted to tackle serious issues in our country with a light touch, and found that there was always a funny or affectionate angle. You can do a lot with Seffrican dialogue and people’s quirks and pretensions. It’s bringing me back to where I started, writing the Blossom Broadbeam column in the Seventies – the first regular column in South African English.
Sight you, fans, as she would say.

the franschhoek press is an imprint under which I have published a limited family edition of The Moor Diaries 1890 – 1916, and assisted the University of the Western Cape to publish This Is My Land, writing from the UWC CREATES Programme.